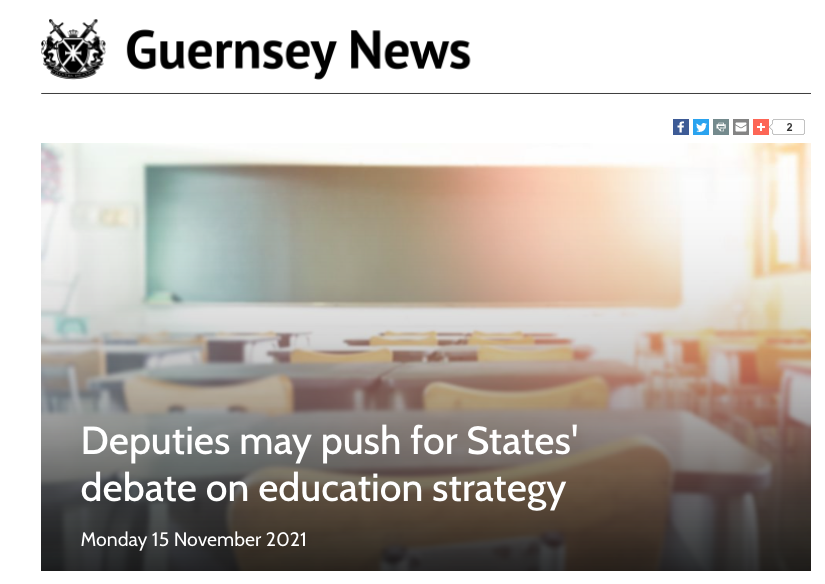 The Committee for Education, Sport and Culture provided an update on work progressing the Education Strategy. This is a key action area under the Government Work Plan and has been referenced many times in debate. The update provided a high-level overview of the strategic objectives going forward developed with Education professionals:

The implications of this update were that the Education Strategy would not be coming for debate to the States.

I was asked to comment by the Bailiwick Express whether I thought the Education Strategy is the type of policy area that should be coming to the States given its importance. Here is what I said:

“I think it is fair to say that there was an expectation that the Education Strategy would come to the States in the way it has been referenced by members of the ESC in the Chamber and elsewhere this year.

Having reviewed the press-release again, I can see the approach being suggested and taken by the Committee and leaders.

This is actually similar to the approach we have taken with the updated Digital Framework earlier this year, which was launched without going to the States for approval. Deputy Murray is a member of the Digital Guernsey Committee and would have been party to this approach.

I cannot speak for the Committee but can understand their intentions as being those of setting a high-level vision and framework and then working with professionals to make it happen day and night. I can see the value of this iterative approach.

However, this does not diminish the importance of engagement and seeking views and participation of different stakeholders, of which deputies are one element.

So I would welcome an engagement program that involves deputies so we can have a chance to contribute.

I would also expect that any initiative under the evolving Education strategy that requires a change of direction, regulation or funding that falls outside of the Committee delegated authority or the Government Work Plan would indeed come to the States for debate and approval.”